Food + Wine September 22, 2020 15Views 0Likes
Last week we showed you New World Tempranillo, but the Fableist has another Spanish varietal to share with you. There is no resisting the temptation of the newest addition from the Field Recordings book – Albarino!
Indigenous to the Northwest of Spain and Portugal, Albarino is typically characterized by its maritime and coastal influences. While hearty and round, it is often a pleasantly salty and can have a distinct mineral component depending on where it is grown.
The Fableist “Fable 426” Albarino 2019, California $23.99
Although far from its native Spain, we cannot get enough of its California counterpart. Bright peaches, lemon-lime twist and honeysuckle dance together, balanced by acidity and just a hint of effervescence.
Try It Today!
What To Eat with the Fableist Alabarino 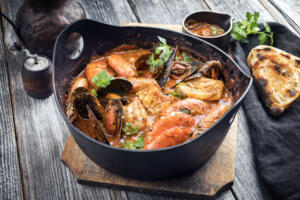 In Spain, Albarino is almost synonymous with Paella. It is one of my favorite summer wines, but this summer has twisted my buds and I’m enjoying it right into Fall. Cioppino, while largely based on Italian influences touches on the traditions of Spanish Paella and French Bouillabaisse, which include the addition of saffron. ~ Josh, Assistant Manager
Main Dish: San Francisco (SF) Cioppino is a seafood dish brought to the states by the Italian Fisherman in the SF Bay area. With a tomato based broth, herbs and white wine, it often included whatever seafood was leftover from the days catch. Serve with a side of toasty garlic bread.
Cheese: I’m going back to the roots in Spain. Manchego, aged 3-12 months, from La Mancha.
Tags:

Discovering the Wines of Carmignano

Win a bottle of Pappy Van Winkle 20 year old
Raffle tickets are only $5!
Tickets available in-store or over the phone at 410.576.0444.
Raffle begins Monday, January 21st through Saturday, February 23, 2019
Proceeds to benefit the American Heart Association